The F Distribution is a continuous probability distribution. We commonly use it to test hypotheses about equality of two population variances and comparing linear regression models. You can see a code example of the latter in the blog post Linear Regression in SAS. The F Distribution has Probability Density Function

are positive integers indicating the degrees of freedom and

is the Beta Function. At first sight, the definition of the Probability Density Function does not give much intuitive sense. Therefore, I usually think of the distribution as a relationship between two Chi Squared distributions divided by their degrees of freedom. Consequently, a random variable

is F distributed if it can be written as 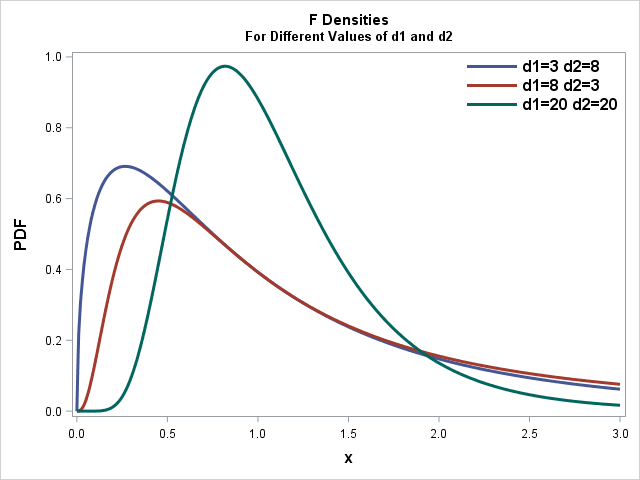 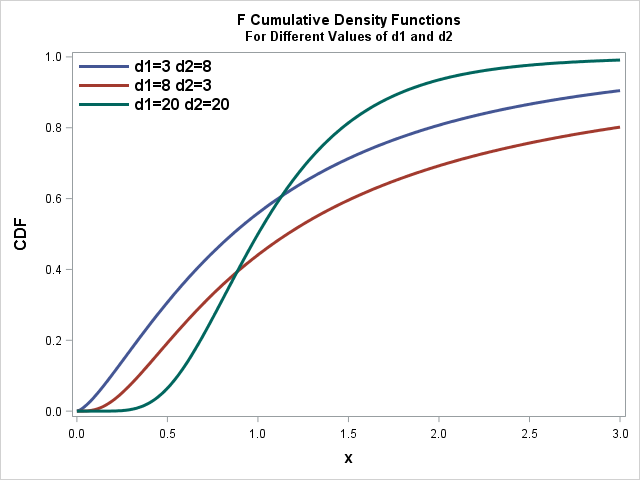 Below, I have written a small SAS program that lets you set the degrees of freedom in the numerator and denominator respectively. I encourage you to play around with these and see how they affect the density drawn in the program. What happens when they are both large? Or small? And what happens when one is much bigger than the other?

A frequent use of the distribution is in the F test. We have seen that a t Distribution is used to compare means to hypothesized values and among samples in the One Sample T Test and the Two Sample T Test. We use the F Test to compare variances/variability among samples or groups. Lastly, you can see examples of how the test is constructed and used in the Statistics Examples page F Test.