First of all, let us create some small, simple count dataset and look at how the data is distributed using a simple plot.

Visually, it seems like the data could be fitted well by a simple discrete distribution. Let us first take a look at fitting the data with the Poisson distribution. 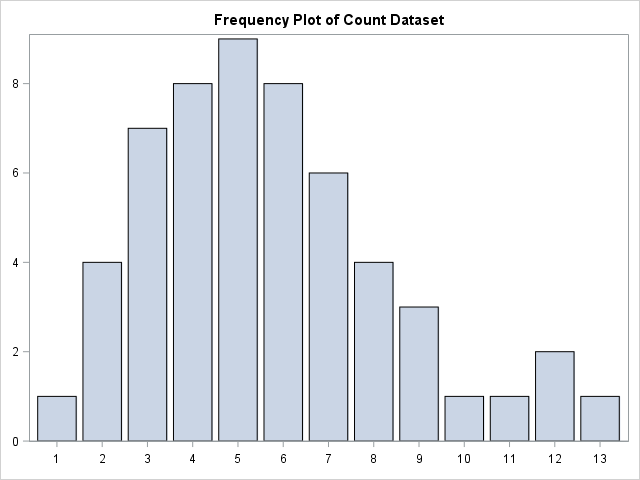 , that represents both the mean and variance. I use PROC GENMOD to fit the Poisson distribution to the hypothetical data above. In the model statement I specify the dependent variable count and no independent variables. At first, this may seem a bit odd. But remember that when no explanatory variables are specified, only the mean of the model is fitted, which is exactly what we want. I specify the dist=Poisson option to the model statement to emphasize that I want to fit the Poisson. Lastly, I output the fitted parameters to the PoissonFit dataset for later analysis.

As a result, the above Genmod Procedure yields a highly significant Maximum Likelihood estimate of

. In the two datasteps following the Genmod Procedure, we save the ML estimate of

in a macro variable and calculate the theoretical Probability Mass Function of a Poisson distribution with this parameter for later comparison of the actual data and the fitted PMF.

Similar to the Poisson example, I use PROC GENMOD to fit the model with no explanatory variables. Also, I specify the dist=negbin to fit a discrete Negative Binomial Distribution. After that, I calculate

from the ML estiamtes of the dispersion and intercept in the model. This results in ML estimates of

. Similar to the Poisson example, I save these in macro variables and use these to calculate the theoretical Probability Mass Function of a Negative Binomial distribution with the estimated parameters 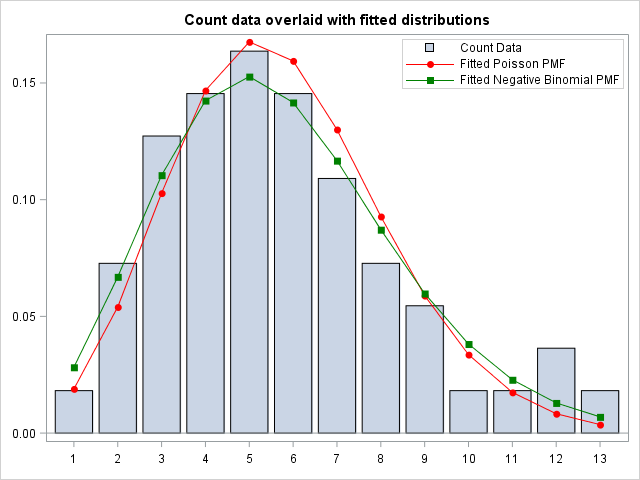 SAS can fit discrete probability distributions to univariate data with the Genmod Procedure. Needless to say, this is not the only way, but in my opinion it is the simplest and most efficient. You can also use PROC COUNTREG as demonstrated in this Example. As this example shows, fitting discrete distributions requires a bit more work than using PROC UNIVARIATE in the continuous case. You may wonder why we use PROG GENMOD or PROC QUANTREG to univariate analysis, because these are traditional regression procedures. I certainly did when I first learned about this. For a great introduction to why this is a very good idea in SAS, check out the article Use regression for a univariate analysis? Yes! by Rick Wicklin.