The test data set contains 21 ordered observations with a time variable and a value variable. This is a typical time series data set.

First, let us consider creating a moving average using the data step. First, I set the number of periods 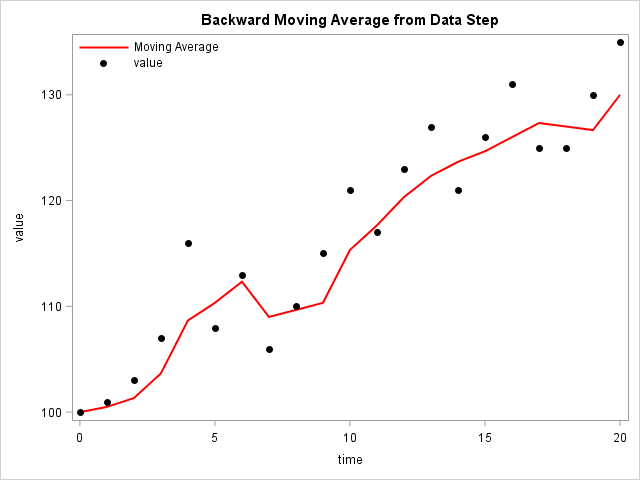 The Data Step way is in my opinion a bit overly complicated in this context. It requires many complicated features of the data step and it is hard to implement by-group processing. Though this is done beautifully in the macro from the book Cody’s Collection of Popular SAS Programming Tasks and How to Tackle Them. You can find the macro in the free code examples from the book in the link.

Next we look at an example using PROC IML. First, I read in the data created above. Then I set the number of periods I want to look bank (n=3). Next, I allocate a vector to hold the Moving Average values. Then I use

to calculate the range of values for my rolling average. Again, remember the tails. In the data step solution, I used a separate if statement to deal with this. Here, I use max(1, i-n+i) to ensure that we do not use observations less than the first one.

The IML way is in my opinion superior over the Data Step method, because of the simplicity of the code. Also it is easier to calculate rolling averages for different groups and much easier to calculate both weighted and exponentially weighted rolling averages. Furthermore, it is much easier to adjust to a centered or forward-looking moving average in a vectorized language such as IML than in the data step, where we would also have to incorporate leads of observations in the code. For examples of creating Weighted Moving Averages and Exponentially Weighted Moving Averages in SAS/IML, see the article Rolling Statistics in SAS/IML by Rick Wicklin. 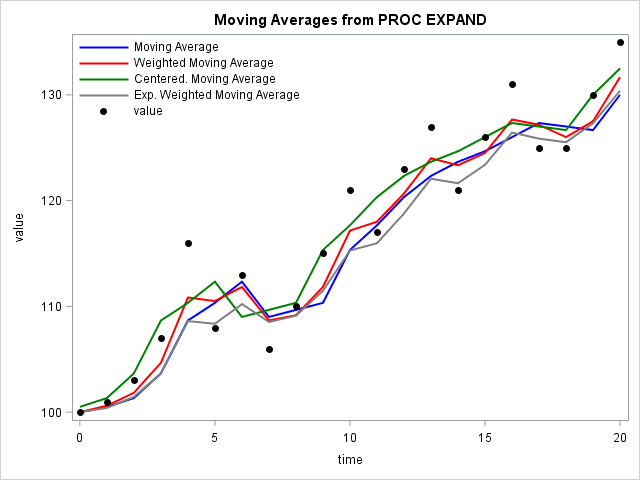 Lastly, let us consider my favorite way of creating moving statistics in SAS, PROC EXPAND. In the blog post LEAD function in SAS, I said that is would not be my last post recommending PROC EXPAND. Below, I have written an Expand Procedure. In the procedure options, I specify the name of the output data set. Also, I specify METHOD=NONE option to suppress the fitting of cubic splines between the data points.

I have specified four Convert Statements in the procedure. The first one creates a simple three period backwards moving averages in the previous examples. In the next one, I specify transformout=(movave(1 2 3)) in the statement options. This creates a Weighted Moving Average, standardizing the weights 1, 2 and 3 so that the variable WMovAv is given as

. The smoothing weight number (SWM) is a number between 0 and 1, which calculates the next value in the EWMA like this:

. This means that the Exponentially Weighted Moving Average is a 1 period Rolling Statistic with a single parameter between 0 and 1. You can see the resulting curves created by PROC EXPAND to the right.

Keep in mind that the variable in the ID Statement must be a date variable.