The SAS Hash Object is a very efficient tool to look up data and much more. When we use a hash object, we expect it to be fast. Therefore we should tweak the different hash object options and argument tags to our advantage. This post presents the HASHEXP argument tag. I will briefly explain the theoretical purpose of the HASHEXP tag. Following, I will demonstrate how important it is by demonstrating how run time is decrease when we increase the HASHEXP value.

When a hash object is declared, a set of AVL trees are constructed behind the scenes. An AVL tree is a tree structure filled with key values that can be searched for a given key value using a binary search algorithm. The HASHEXP argument determines the number of AVL trees that the hash object creates. By the nature of a binary search, the more values in a tree, the slower the search. Therefore it is desirable to have as small a number of key values in a given tree. I write about the distribution of key values into AVL Trees in the blog post AVL Tree Distribution in SAS Hash Object Explained.

The value of HASHEXP is set in the hash object arguments in the Declare Statement. It accepts an integer value between 0 and 20. The number of AVL trees is determined as $2^{\text{HASHEXP}}$. This means that a SAS hash object can contain between 1 and 1048576 trees for HASHEXP equal to 0 and 20 respectively. The default value is 8, which results in 256 trees. As we will see in a minute, the number of search trees has an enormous impact on run time when searching for a key value in a hash object.

When the hash object encounters a key value, it runs a hash function on the key value. This hash function determines which of the $2^{\text{HASHEXP}}$ trees the key is assigned to. The hash function is designed so that the same key value can not end up in different binary trees. This is the reason why we can Group Variable Values With The Hash Object In SAS. Two of the most famous hash functions are the MD5 Function and the class of SHA Functions. In a future post, I will discuss there in further detail.

As an example, let us see how increasing the HASHEXP tag affects run time. First, we create some example data. This consists of an arbitrary ID variable and a name. The example data is for demonstration purposes only. 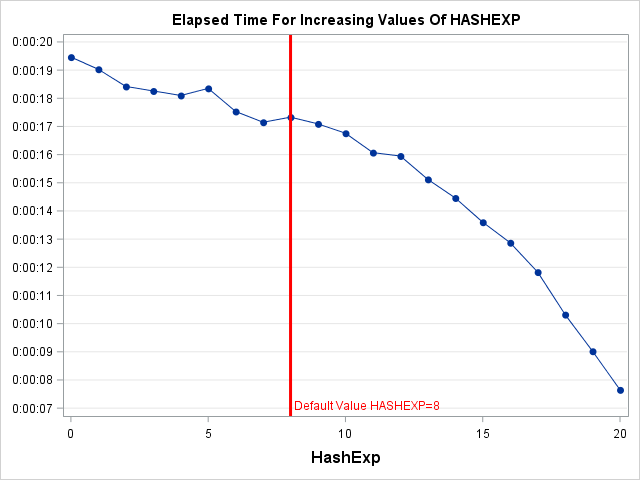 In this post, I demonstrate how we can reduce run time when searching for key values in a hash object. I introduce the HASHEXP argument tag and what it does. Next a case study shows that setting the value to max has an enormous effect on the elapsed time of the search algorithm. We cut the run time in less than half.